“Luck is what happens when preparation meets opportunity.”
~Seneca
I love the NCAA tournament. Every year there is a team who goes further than predicted. I join a poll every year and every year I am high on a team that gets knocked out early. When the brackets come out, all of the analysts put in their 2 cents. Dicky V always has an 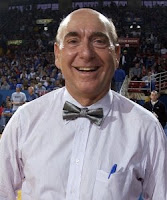 Every year there are teams on the bubble. The "at large" bids are the big question. Which bubble team should be in the tournament? Each year there is a team that has an argument. This year it is Arizona State who missed out while the team they beat twice, Arizona, made it. Dayton may have an argument as well. For the tournament committee, it can't be easy.

Tomorrow is known as Black Monday. The day that all resident applicants find out if they matched or did not match. I remember this day well. I previously posted about how the process had affected me. Black Monday reminds me of tournament Sunday. Teams on the bubble sit waiting to hear if they are in the tournament.

To all of you in the match, good luck.

“Serendipity. Look for something, find something else, and realize that what you've found is more suited to your needs than what you thought you were looking for.”
~Lawrence Block
Posted by Someonect at 2:47 PM

Just wanted to wish you a Happy Easter, Someonetc.;)

Go Spartans! On to another national championship I hope. I always would pick Missou until they fired Quin Snyder (for good reason it would seem).