“A lot of truth is said in jest.”
~Eminem 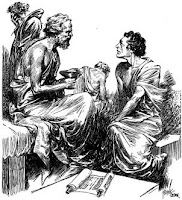 Socratic questioning has been at the heart of clinical medical education many years. Traditionally, the educator asks a question so that the original question is responded to as though it were an answer. The central technique of Socratic questioning is known as elenchus, meaning a cross-examination for the purpose of refutation. In medical school, this technique of education is more commonly referred to as pimping. This style of teaching is seen as a way of the educator showing his/her greater knowledge of a subject. Depending on how and where it is enacted, pimping is perceived as a unique kind of questioning practice with a wide range of intentions from knowledge checking to humiliation. Some educators use elenchus for knowledge checking; others educators pimp. The students perspective of this style is the same regardless of the intended purpose.

The earliest use of the term pimping dates back to 1628 in a statement made by Harvey in London. Harvey, feeling his students lacked enthusiasm for learning the circulation of the blood, stated: "They know nothing of Natural Philosophy, these pin-heads. Drunkards, sloths, their bellies filled with Mead and Ale. O that I might see them pimped." In Heidelberg (1889) a series of questions titled "Pumpfrage" or "pimp questions" were recorded by Koch for use on his rounds. And the first American reference to this was by Flexner in 1916. He wrote about his visit to Johns Hopkins: "Rounded with Osler today. Riddles house officers with questions. Like a Gatling gun. Welch says students call it 'pimping.' Delightful."

Now, if we look truly at the Socratic questioning, its purpose is not politically motivated. It is for the purpose of educating and to improve the students understanding of a subject through questioning. On the other hand pimping can be more politically motivated. Many times pimping is used as a way for an attending to show his/her knowledge. Knowledge is power. Pimping sets the hierarchy.

In the art of pimping, questions should come in rapid succession and be somewhat unanswerable. Questioning can be grouped into approximately 6 categories:
For a master pimp, these are important categories to understand. Their utilization, while at a nursing station or in front of many naive on lookers, can gain the questioner many power points. It is like flexing your muscle in the gym mirror in front of the elliptical machines.

While understanding the ways of pimping tactics is interesting, it is more important for the student to understand the classic defense strategies to stymie the master pimp. When using these tactics, the student must be careful not to anger the questioner making the situation worse. If done improperly or if the technique is not properly disguised, it will quickly be countered with quickly countered. There are several classic techniques: the stall, the dodge and the bluff.Now, once the offensive questioning tactic is put into play and the student's defense is chosen, where do the errors occur. Probably the most common error for the inexperienced student is the misuse of defensive tactics. When a student shows his/her hand early, it allows the educator to see their lack of understanding of the subject and is like blood in the water for some educators. These are easy pickings for malignant educators. Just as problematic as improper use of a defensive tacts is not having good control of the "Brain Mouth Filter." Although knowledge is power, welding a little knowledge without an understanding will get a novice in deeper than s/he can handle. Once a novice learner gains some experience and knowledge, they begin to overstep their understanding and bring up other topics and controversies without being asked. Students that has a running dialog of his/her thoughts, it opens them to more questioning.When this is done, one of 2 things can happen: the student can get an endless onslaught of questioning there by saving all others from questioning or the team will share in the beating. The learner must develop ways of diverting questioning and putting a closure to the questions. Filtering their thoughts prior to speaking is a must.

In the end, the pimping phenomenon is a game. The educator is the game master controlling the many of the parameters of play. With time, a learner will develop both a knowledge base and thought process. They develop there own styles of processing and answering "pimp" questions. Hopefully at end game, education occurs.

A useful student tactic:
The physiological/pathophys response: A form of stall, to build up to an answer that may or may not come to oneself while delivering the answer. Usually the basic physiology is explained (to show that you are somewhat intelligent,) leading to what could *possibly* be the answer.

The OITE employs a popular technique we often referred to in residency as "Have you read my paper?"

As a result, the words "dog DNA" have taken on a whole new meaning to anyone probably PGY-3 to PGY-7.

Very interesting. Although I have never been a resident, I see myself in the "dodge" technique. I may also be guilty of using the stall although I defend myself here by saying that I was searching my brain for the answer.

I felt nervous reading this! You want to learn, but you're afraid to look stupid. I remember an instructor asking a student how to tell if there was fluid in the lungs, she answered "You ask them?" He looked right up at me, eyes wide open. I'm sure you can imagine the expression. I looked back and didn't say or move a muscle in my face (very hard for me to do). I felt so bad for that student. I was glad I wasn't "that" nervous.

I love being pimped when I do not feel threatened, but the contrary is the usual case. My heart begins pounding...and if not careful, I will use any of these ineffective defense strategies (most often disclosing even more holes in my knowledge than if I wouldn't have said anything at all).

I am getting better though...now I try to relax more and just accept that I know what I know, and that is it. I say what I know, what I see, and the rest I don't guess unless they specifically ask me for a guess. An honest and firm "I don't know" can go a long way.

Great post! Made me smile. I usually go straight to the honest "I don't remember, but I can tell you tomorrow" when pimped about something I don't know. On exams, my favorite technique is, "If you don't know the answer to the question they're asking, show them what it is you do know..." :)

BoneDoc23: the OITE is known for that. i took it one year and one 5 or so questions, i could tell you who wrote it.

MMT: aawww, that is so easy to spot. i call folk on that all the time. work on another defensive technique.

Chrysalis: this situation makes me nervous too.

MD007: you adrenalin junky. this is the best attitude to take, don't be afraid of being wrong. i will warn you that you must be careful, exposing wholes in you knowledge sets you up for more pimping. i think saying you don't know does go a long way.

MWWAK: the showing what you do know only works when you are right with what you know. if you start with all of this information but don't know everything you could be in for a pimping lesson :)

My brother recommended I might like this web site.
He was entirely right. This post actually made my day.
You can not imagine simply how much time I had spent for this info!
Thanks!
My page - Www.partygalleries.Com

Today, I went to the beachfront with my children.
I found a sea shell and gave it to my 4 year old daughter and said "You can hear the ocean if you put this to your ear." She placed the shell to her ear and screamed.

There was a hermit crab inside and it pinched her ear.

She never wants to go back! LoL I know this is totally off topic but I had to tell someone!


Here is my web-site - More info

Wonderful beat ! I wish to apprentice at the same time as you amend your website, how could i subscribe for a weblog web site?

The account aided me a appropriate deal. I have been
a little bit acquainted of this your broadcast
offered brilliant clear concept

First of all I want to say terrific blog! I had a quick
question in which I'd like to ask if you don't mind.
I was curious to find out how you center yourself and clear your thoughts before writing.
I've had a tough time clearing my mind in getting my thoughts out. I do take pleasure in writing however it just seems like the first 10 to 15 minutes are generally lost simply just trying to figure out how to begin. Any ideas or hints? Many thanks!

Excellent post. I was checking constantly this weblog and I'm inspired! Extremely helpful information specially the remaining section :) I care for such information a lot. I used to be seeking this certain information for a very long time. Thank you and good luck.

I do believe all of the concepts you've introduced in your post. They are really convincing and can certainly work. Still, the posts are very quick for novices. May just you please lengthen them a bit from subsequent time? Thanks for the post.