“For my part I know nothing with any certainty, but the sight of the stars makes me dream.”
~Vincent van Gogh
I posted last year about a good patient experience. It was a story about a patient that actually liked me. I titled it "Not everyone will like you." Some people criticized the title as false advertisement. I received some comments that stated I was basically tooting my own horn. For those that know me, they know that is not the case. For most of us in clinical practice, we hear more of the bad than good and occasionally someone will actually like you. My personal opinion is that we should not practice so that people will like you, because not everyone will; you should treat people like human beings. It is not a popularity contest. So for all of those who were a fan of that one, here is another.

It is Sunday. As usually, I am completing some work, signing forms, writing letters, etc.. In my pile of work, I came across a hand written letter from one of my patients. I will share it with you. 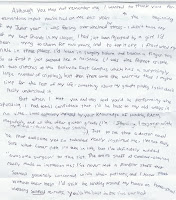 Although you may not remember me, I wanted to thank you for the tremendous impact you've had on me this year. At the beginning of my Junior year, I was feeling overwhelmed by stress - I didn't have any of my best friends in my classes, I had just been rejected by a girl I'd been trying to charm for two years, and to top it off, I fractured my ankle in three places. I'd been in surgery before and broke a finger too, so at first it just seemed like a nuisance (I was the fastest cripple on two crutches at XXX school, which has a surprisingly large number of cripples), but then there came the worries that I might limp for the rest of my life - something about my growth plates, I still don't really understand it.

But when I met you and was told you'd be performing the operation, I had total confidence that I'd be back to my old ways in no time. I was especially impressed by your knowledge of Hendrix, RATM, Megadeth, and all the other guitar greats (I'm starting my lessons with my friend - I think he's the next Steve Vai) Just to see that a doctor could be that awesome yet so talented really inspired me. I'm not really sure what career path I'll take in life, but I've definitely added "awesome surgeon" to the list. The entire staff at XXX really made an impression me; I've never met a friendlier staff that seemed genuinely concerned with their patients, and I know that without their help I'd still be lurching around my house on home-school watching Seinfeld re-runs. You're the best doctor I've ever had.

*P.S. - My step dad's getting getting his summer Mohawk next weekend.

That letter made my weekend. So I thought I would share it. It was nice.

“If your actions inspire others to dream more, learn more, do more and become more, you are a leader.”
~John Quincy Adam
Posted by Someonect at 5:24 PM

Labels: inspiration, thoughts of an educator

What a great letter! Just think there are many, many more that have just never been written. People will talk about how much they've been helped by such and such a doctor, yet never think to sit down, and send them something like this. That's something to look at on the days you feel taxed out.

I agree we shouldn't "practice so that people will like you, because not everyone will; you should treat people like human beings. It is not a popularity contest."

*nod* absolutely wonderful. One thing that I was shocked to see when I first started doing this whole med student thing was how patients can be so appreciative of whatever you have done... even if you havn't physically done anything.

I remember that during my surgery rotation I took care of a pt in pre-op. Chatted with her about wha was going on, who was going to do what, answered questions etc... It was pleasant.

When the pt was post-op day 2 or 3 or so, I remember the attending coming by while we were rounding.. and the patient was sort-of downtraught whilst talking to the attending. The second I walked in the door, there was a complete change, like a flip of a switch: a big smile came on her face. "Hey Doctor Paul!!!" I smiled.. and said.. remember, not yet!.. she said "you're more of a doctor than most of them I've met here". The attending looked at me, I smiled, and he smiled. It was good.

That doesn't happen often enough in my opinion. I think adults are very shy to share those kind of feelings. On the otherhand (another reason why I really want to do peds orho,) I think that the children are much more open with their gracious feelings...It's great to see that. I wish adults were more like that! But then again, i could be because I feel like I identify more with the children.. but who knows.

But awesome letter! He might just have the handwriting of a doctor yet ;)

That sort of feedback is priceless!

PS, I just tagged you for the 6 word memoir meme!

A resident at our local teaching
hospital told me that is how he
chose medicine. He said, "who would
not want to be a part of that?"

Someday that young person may be your'colleague. Bravo!