“Censorship in any form is the enemy of creativity, since it
cuts off the life blood of creativity: ideas.”
~Allan Jenkins
Something happened today that I found very distressing. I was told that I might have to take down my blog. Let me step back.

A couple of weeks ago I wrote about an incident that happened between me and a radiologist. It was true. It did happen. It was my perspective on the situation. It was a rant or probably more of a vent of my frustrations. As pointed out by a number comments, it was obvious that I was in the right. (funny cheesy grin)

Some people commented about my bravado and that I was big man showing my clinical acumen:

both of you are such badasses. you guys are my heros! i can only hope to be a stud doctor like both of you by telling stories about how stupid other people are and how brave and clinically superior i am than everybody else.

Another posted how great my patient care was, how appropriately I title posts, and how well I read radiology reports:

orthopods always go straight to the radiology reports when something is missed to make sure the radiologist missed it too... preparing to share/deflect the blame. If there is a lawsuit, do they tell the lawyers, though the radiologist also missed it, take it easy on them, they aren't that smart to begin with?

The last person commented on the my humbleness:

that one was a bit self-rewarding. Oh, well.

Also, in that blog entry, I used the curse words that I use on occasion. I have used them in some other blog entries, probably the most notable is FFT. For the most part, I swear in my head, as seen in a previous post about my head during a big case. I think my wife actually swears more than I do. 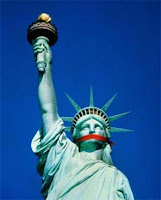 So, today I have received information that the above "said radiologist" came across my blog entry and had submitted a complaint about me for the "incident". He also brought up the "ADULT" language that was in my blog. Another concern that was brought up was HIPAA. The HIPAA thing threw me. Although I have referenced cases and disease disorders, I don't think I have ever mentioned a name, shown an xray, or placed patient information anywhere on my blog.

So, I will continue to post as long as I can. Some of the less dry, said in fun, tongue and cheek, and more personal posts may be gone, but at least my shell will be here. It is sad that in a country that has freedom of speech you are censored, your thoughts can be restricted, and you can't have a differing opinion. I am human. I make and have made mistakes. I have no problem saying when I am wrong or at fault. But, if I have a problem with a specific person, I first address that person directly. I welcome that dialog.

“Censorship reflects a society's lack of confidence in itself. It is a
hallmark of an authoritarian regime.”
~Potter Stewart

Posted by Someonect at 4:54 PM

Labels: thoughts of an educator

Wow. This is pretty sad. I have really enjoyed your blog and think it would be a shame if it were to be censored.

From my limited experience, radiologists seem to have it out for orthopods. I have a somewhat humorous story to illustrate this:


I am a med student, hoping to go into orthopaedics. Its summer after first year, and I'm doing research during the day, working as a valet at night to make ends meet.

One night, while parking cars at a fancy steakhouse... It's pretty slow (people like to park their own cars when the weather is nice) so i'm passing the time reading Medical Micro Made Ridiculously Simple. Then, a brand new mercedes convertible pulls up. I open the door for the lady (who has an uncanny resemblance of Anna Nicole Smith). The short, frumpy older guy in the passenger seats mumbles something about parking his car up front and hands me the keys.

About 45 minutes later, Mrs. Smith comes outside next to the valet stand for a cigarette. After watching her light the filter of her only smoke, I offer her to let me cut the burnt piece off with my pocket knife. She obliges and lights away (the right end, this time).

She begins telling me how much she can't stand the boring conversation at her dinner table. I say "oh, is this your first date?" No, its my husband, she replies. Ouch.

Seeing my book, she asks if I'm a student (master of the obvious). I tell her that I'm in med school and she in return asks the typical "what do you want to specialize in" line of questioning. "I've just finished first year, but I'm very interested in orthopaedics" i reply. "Oh, my husband's here with a radiology group and they CAN'T STAND orthopaedic surgeons... They're always thinking they can read their own films, bla bla bla..." Turns out I had parked 2 cars that night for a radiology group that was celebrating the hiring of a new radiologist.

Before I could explain to her that I was just a student and that I wasn't trying to take away her allowance, she goes back inside.

45 minutes later, she comes back out again for another cig, this time managing to find the correct end.

About an hour later, the whole group comes outside. The husband of Mrs. Smith says: "so you're the wannabe orthopod?" One of them says "oh, you're reading 'ridiculously simple'?" and begins to tell me about how great radiology is and how IR is the future of surgery and I should reconsider my chosen field. I smile and get their car keys. By this time its an hour after we are technically supposed to close and I'm ready to get out of dodge.

As I hand the first set of car keys to the younger looking couple, he hands me $6 (the cost I owe to the company for each car parked is $6). Thanks guy. I then pull up the the convertible benz. Dr. Smith looks me right in the eye, slaps a wadded up bunch of bills in my hand and says "Good luck, kid." Before I could unwad his cash, they are gone...

nice story. i think there are a lot of stories between ortho and radiology, ortho and ER, ortho and medicine and/or surgery. truth is we all have a role. we need to know what are role is in patient care and what our limits are.

radiologist have become technicians. they truly provide no patient care. they provide a service. IR is cool, but if they have a complication (such as cement in the spinal canal after doing a kyphoplasty) they can not take care of it. we all need to understand what our roles are in patient care.

in my argument with the said radiologist, his partner chimed in "we do have an MD." problem is, when was the last time they actually provide patient care? they provide patient service. as much as orthopaedic surgeons get talked about for being glorified carpenters, we still take care of patients. we come in at night and deal with the issue at hand. the radiologist reads the study 1 day later and calls after we have already dealt with the problem to let us know that there was a problem.

I hope that this blows over, and that nothing bad comes from this. :P

sorry for the clam comment on your last post (hitting self on head saying a Hommer "doh"). i meant calm (cheesy grin)

So let me get this straight. The radiologist was being an asshole for no apparent reason. Wouldn't perform an indicated study that happened to be completely safe. You called him out because of this. You then post this incident to your blog. And now he runs across it and his feelings are hurt?? So then he goes and tattles to the boss? What a little bitch! Maybe if he didn't want to get his feelings hurt, he shouldn't have been an asshole to begin with. If you start a fight, don't be crying if someone else finishes it!

I think I understand now...A fresh wound. I'm sorry you've had some trouble. You can delete this after you get this and you can feel free to delete the comment I left on your newer post asking about your stress. I hope things get better. I am curious though..how did you come across my blog? Best to you.

chrysalis, thanks for your visits. my stress is minimal now. i have renewed. :) ... i think i found your blog from a comment you made on another blog. hhmmmmm can't remember where. i like what you have to say. well centered and spiritual.

Wow... how odd to see the words one wrote in the early 1990s appearing on a blog in 2007. If I'd known that quote was going to stick around, I would have made it pithier.